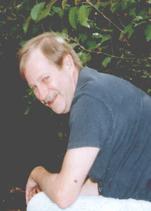 Chauncey Uphoff was a friend, mentor, goad and inspiration for those that worked with him and I expect a giant pain in the rear for those that tried to manage him. He passed away during the morning of 14 December and his passing was immediately felt by his friends, colleagues and family. This web site is named after C. B. Boff who was Chauncey's alter ego.

There is a guest book as part of the obituary notice for Chauncey at the Los Angles Times. We also have a copy of the obituary notice that appeared in the Los Angeles Times and a PDF file of the eulogy that his colleague Dr. Louis Friedman Executive Director, The Planetary Society wrote for him based upon his own feelings and the comments of many of Chauncey's colleagues and friends when they heard of his passing.

While Chauncey was working at the Jet Propulsion Laboratory in Pasadena, California somebody saw his signature on a document and asked "Who is this, this C. B. Boff?" and Mr. Boff was born. Mr. Boff lived in Riverside and worked nights. This allowed the two of them to share an office at JPL. Mr. Boff was listed in the JPL phone book (as a contractor) through the good offices of our secretary at the time (who will remain nameless here unless she directs otherwise). Many Proclamations were issued by Mr. Boff via his good servant Chauncey.

In a more serious vein, Chauncey taught a course in mission design at the University of Colorado.

Mike Loucks who is the President and Space Mission Engineer at Space Exploration Engineering Co. has set up an Astrogators Guild web site that has many quotes from some of Chauncey's friends when they learned of his untimely death.

A description of Chauncey would be incomplete if I didn't say that Chauncey was a strong believer in such concepts as paying proper credit for innovators' ideas and in the study of the teachings of Andrew J. Galambos and the Free Enterprise Institute that he founded.